The Anointed Order of Iron Stars

The Order of Iron Stars was founded some five hundred years ago as a small monastic cult dedicated to the worship of Syu, an aspect of Mulciber. The first monastery was built on the southern flank of the Spineback Mountains Range where a meteorite was seen crashing. This, the priests believed, was the sign telling them where to settle and build their order. The bright light produced by the meteorite and the large amount of pure iron it spilled on its crashing site gave the order its name. The iron is since collected and forged into various holy symbols, statues and ceremonial artifices.

For a while the monks were content to spend their days in the study of the P’tau, their sacred text. Increasing tensions and troubles in the Empire of Döãrn eventually reached neighboring regions, even on the other side of the Spineback Mountains. Bandits found the monastery and defiled the Iron Star’s chapel. The monks recovered and took inspiration from the most vindictive passages of the P’tau. They taught themselves to fight and use dark curses on their enemies; the monks were determined never to be victims again.

Agenda The Order’s primary goal is to recover the lost passages of the P’tau and unlock their full meaning. Iron Stars believe the full text was found in only a handful of volumes which were torn apart when a conflict arose among the Majestic Fives; prophets chosen by Syu. The vellum scraps were disputed among lesser priests and the text was thus fragmented as each went its own way with a few tatters. Searching parties are dispatches across the continent in attempts to track and retrieve the other passages. Other similar religious cults are watched closely in case one of them shows signs of possessing knowledge about the original P’tau.

Its secondary goal is simply to apply the doctrines of the restored P’tau, chief among which are concepts of survival and freedom that allows for any measure, especially pre-emptive ones. Those concepts explain why the Iron Stars cannot accept any power over them be it in political, economical or religious in nature. The Order thus self-justifies all its actions as the establishment of means to prevent subjugation.

Following the bandit raids on the monastery, more efforts are invested in understanding the verses related to the moral guidelines tied to dealing with enemies and infidels. The Order’s methods are refined a little more as additional verses of the P’tau are understood.

Current Leadership & Structure The Order of Iron Stars was originally an homogenous masculine group of scholars who tried to locate lost passages of the P’tau while attempting to decipher and understand those they already had. Since their reformation following the bandit attacks, the order was divided in three groups: The Primarchs, The Relicars and The Talons. The reformation has also led to the recruitment of women. The Primarchy is composed of the leaders, administrators and diplomats of the Iron Stars. They decide who to promote or recruit, which nobleman should be helped, bullied or killed and how to deal with other churches, sects, cults, etc. Of the three groups, the Primarchy is numerically the smallest. There are only nine and draws from the elite of the Relicars and Talons as they pass away or if they become mentally unfit.

The Relicary, which consists of about half of the entire order’s membership, is the closest to what the original Iron Stars were before the reformation. Relicars specialize in studying the P’tau, provide the religious services and conduct most of the order’s occult research. They also take care of relics to ensure they are preserved for the future generations.

Lastly are the Talons, the combatants, assassins, spies and saboteurs of the Iron Stars. Talons typically operate in groups of four to ten to conduct missions given by the Primarchs. They are employed to deal with enemies and enforce the compliance of selected individuals to the order’s requests.

Assets Power Bases The Iron Stars can count on the support of several satellite cults dedicated to Syu and Mulciber. The monastery is seen as a holy place and the Relicars residing there as providers of the true scriptures; the translations of the P’tau. In fact the Irons Stars have shared fragments of their progress on the P’tau. They hand out the philosophy but retain most of the words and names of power to themselves.

The monastery is also major asset. It has been turned into a small fortress and rests in a location that is not easy to access. It can be reasonably well-defended by just a few. The large reserve of iron, upon which it sits, it turned into a steel that evokes a certain religious fervor from the followers of Mulciber who can recognize the work of the Order. The relicars are very careful with their inventory of smelted iron and the objects made from it.

Secrecy & Influence The Order of Iron Stars exerts influence over the states closest to its monastery. Their presence is especially strong in the communities of the Vintage Hills. It managed not only to ensure the security of its main base of operation but also to somehow force the hand of every ruler in the region. The Order skillfully plays rivals against each other gaining the advantage when one becomes desperate enough. The Order’s existence is not a secret but their research and goals are.

Because they have regularly taken on bandits and criminal gangs, the order benefits from some level of sympathy by the common folk. This has also helped the recruitment for many small cults dedicated to Syu or Mulciber, all of which have been coerced in paying a seasonal tithe to the Iron Stars. Even the increasingly powerful Guild present in Gravina has been maneuvered into running jobs for the Order. The Relicars of the Order are aware that they possess, at most, only 25% of the original P’tau to work with. This fact has been kept secret form the smaller cults around the order but also to the Primarchs and Talons.

The reformation was engineered by the original Iron Stars to allow them to pursue their theocratic researches without secular burdens. They have set up the Primarchy to administer their diplomacy and revenue sources and the Talons to protect them. Most of the “translated philosophy” has been created and produced as part of the P’tau to perpetuate this status quo.

Enemies The Order is an irritant to many nobles inside its sphere of influence. Fortunately for the Iron Stars, none can afford attempts to reduce their power. The Guild present in Gravina is also annoyed with the Order as it knows it couldn’t resist it.

Outside of the League of Merchants, the Iron Stars have some influence in Bregzia, some City States of Döãrn and The League of Cantons. Extension in the later is limited by the Thistle Covenant commanded by the mysterious Surpa. Both groups are extremely careful in matters where the other could be implicated.

The main flaw of the Order is its inability to uphold compromises. The Iron Stars consider compromising giving away something of value, thus an advantage to a potential rival. A party capable of denying the Order what it wants is an enemy it will start probing for weaknesses. The Iron Stars will not stop until they can turn a situation where they have to make an exchange into one where they can instead blackmail for what they want.

Adventure Hooks A party of player character can encounter the presence of the Order in The League of Merchants, and to a lesser extent, the City-States of Döãrn, the League of Cantons and Bregzia. Everyone in the Vintage Hills has heard of the monastery in the mountains, which makes that region the most likely one from which the characters can come across the Order’s presence.

A treasure found by the player characters during a previous adventure has a verse written or carved on it in an unknown alphabet. Unknown to them, it is actually a lost portion of the P’tau. Selling, exchanging that item or consulting scholars for its meaning will attract the attention of one of the cults of Syu or Mulciber gravitating around the Iron Stars. Word will be passed up to the Order that a group of adventurers had its hands on an object with a new verse. The Order will want to know where that object was found to check the place themselves.

As the player characters arrive on the site of an ancient barrow/tomb/crypt/buried temple to pursue their objective, they find the area being thoroughly searched by Iron Stars. The monks have pitched a small camp and it seems like they intend to stay there for weeks. The player characters have to be extra careful to evade the Order’s vigil over the area, even more so if they want to sneak into the site.

A demand for steel ingots produced by the Iron Stars is discreetly passed to the player characters. The buyer apparently wants to make weapons and armors from this superior steel. The only sources for this steel are the monastery’s reserve and the weapons carried by the Talons. This implies executing a heist or taking it from a dead Talon’s hands. Unknown to them, the player characters were given this information only so they would attract the attention of the Talons should they seek to acquire ingots or simply ask around for information. The buyer plans to “rescue” the player character once they are approached by Talons and kill these monks in the process.

Tune in tonight for Boston Besieged

Flames of Freedom Surveys Are Now Out!

After Action, or, What's Next 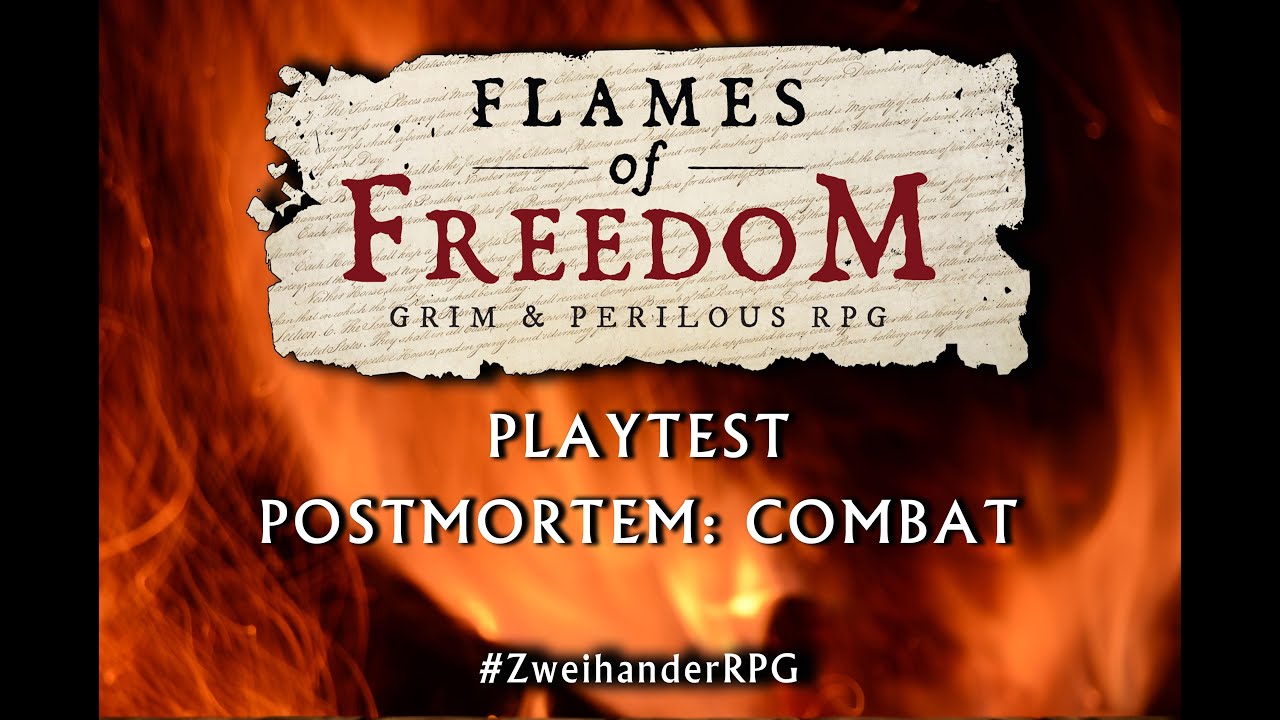